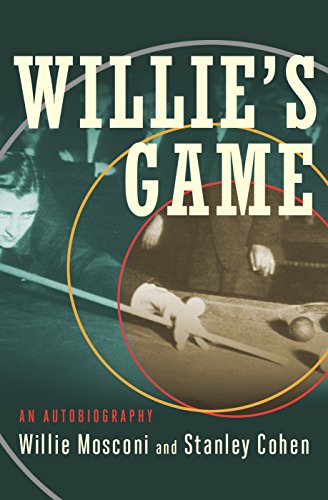 A “fascinating” memoir by America’s greatest professional billiards player, a child prodigy in the pool halls of the 1930s who became a world champion (Library Journal).

Willie Mosconi’s father never wanted him to play billiards. At night, the boy would lie awake listening to the clatter of balls downstairs in the family pool hall, and when his father wasn’t around, he would climb onto an apple crate to practice his shots. When his dad started locking up the balls and cue, young Willie improvised with potatoes and a broom handle. By the time he was 7 years old, he was good enough to play against Ralph Greenleaf in a match billed as “The Child Prodigy vs. The World Champion.”

It was the start of a magnificent career that would include an unprecedented 15 world championships and the record for most consecutive balls run without a miss: 526. Nicknamed “Mr. Pocket Billiards,” Mosconi was instrumental in popularizing pool in America, serving as a consultant for iconic films such as The Hustler and The Color of Money and facing off against the famed hustler Minnesota Fats in 2 celebrated matches.

Cowritten with journalist Stanley Cohen, Willie’s Game is the colorful, captivating autobiography of an illustrious champion who lifted his sport to new heights and played by one simple rule: If you don’t miss, you don’t have to worry about anything else.